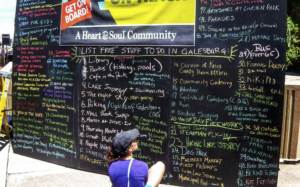 Many U.S. towns and small cities have been destabilized by growth and development, while others are suffering from loss of industry, population decline, and uncertainty over their future. To empower community responses to these challenges, the Orton Family Foundation supports resident-driven town planning through its Community Heart & Soul program. By helping communities identify shared values that inform planning decisions, Orton Family Foundation fosters social cohesion and responsive policy at the local level.

Since 2005, the Heart & Soul program has been implemented in more than 60 U.S. towns. It begins with a local partner, typically a foundation or planning department, that assembles active members of the community into a Community Advisory Team (CAT). With support from Orton staff, the CAT develops and implements a plan to analyze existing community social networks and engages a broad, diverse group of residents to create shared value statements. These value statements inform a planning process that identifies specific actions for the community. Heart & Soul projects take a variety of forms, including long-term land use plans, new local policies, and the creation of new public spaces.

In 2008 Orton awarded a $100,000 grant to Golden, Colorado, to create a long-term development plan: Golden Vision 2030, finalized in 2010. Through various CAT events, over 2,000 residents—more than 11% of Golden’s population—participated. Leaders from low-income and immigrant communities that were previously suspicious of the city developed relationships with the planning department through Heart & Soul events. As of 2019, more than 20 publicly funded capital and operational improvements informed by the Golden Vision 2030 have been completed or are under way, including a pedestrian bridge and expanded trails at the Clear Creek recreational area.

A study by the Wake Forest Medical School conducted interviews and focus groups with 125 CAT team members and participants across nine Heart & Soul communities. Interviewees in all four towns that had fully implemented the model at the time of evaluation cited evidence that Heart & Soul values were informing policy decisions. For example, three of the towns revised their comprehensive plans to reflect input from the Heart & Soul process. Town agencies also developed ongoing capacity to incorporate citizen input, in one case forming a citizen advisory committee, and in another instituting a deliberative forum for town budgeting. Interviewees reported that the Heart & Soul program enhanced trust in local government and fostered new and stronger relationships among residents. The process developed new leaders in communities, in three cases leading to CAT team members running for public office.

Orton estimates the cost to carry out the model at $100,000 over the course of two years. The majority of these funds, up to 60% depending on the market, go to compensating a full-time coordinator to handle long-term and day-to-day demands that can be time intensive. The remainder of the budget includes the costs of marketing, hosting events, and analyzing community input. Past communities have received grant funding from Orton, but now are more commonly financed by local partners. Projects that emerge from the model are typically funded by public expenditures or local foundations.

Finally, the program relies on significant volunteer efforts and in-kind contributions from community members. Orton is a private operating foundation based in Shelburne, Vermont. Funders can support its work through its local partners sponsoring ongoing projects, or contact the foundation about implementing the model in their own community.