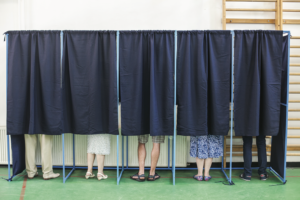 Founded in 1920 with the advent of women’s suffrage, the League of Women Voters (LWV) is a national organization consisting of 700 state and local chapters and more than 50,000 individual members. LWV’s autonomous local chapters support citizens working together on local issues, while their state and national affiliates sponsor debates and advocate face to face with policy makers. Since this federated structure mirrors federal political institutions, it helps facilitate the connection between grassroots mobilization and legislative politics.

LWV of Maine exemplifies how this structure can translate broad-based civic engagement to actual political reform. LWV of Maine regularly conducts in-depth studies of Maine’s political and electoral institutions and disseminates its findings to the public, relying on seven local chapters that partner with libraries, schools, and other civic institutions where voters congregate. Subjects of these studies include money in Maine politics, citizen initiatives, and ranked choice voting (RCV).

In 2018 Maine became the first state to use RCV in federal elections due in large part to LWV of Maine’s efforts. Deciding elections by voters’ ranked preference of candidates discourages hyper-partisan campaign tactics and increases opportunities for third-party candidates. Coordinating with 300 members and its local chapters, LWV of Maine planned more than 200 events (voter registration drives, candidate forums, etc.) and distributed its voter guides at 800 locations (schools, libraries, cafes, and bus stops). These activities ensured voters understood the new ballot so they could cast an informed vote on election day.

Earlier successful reform efforts led by LWV of Maine created public financing for election campaigns, restored same-day voter registration, and mandated increased transparency in lobbying the state legislature. In 2011 after publishing its study of RCV, LWV of Maine officially endorsed RCV for all single-seat elections. While its 501(c)4 partners organized a referendum campaign, LWV worked with its local chapters and civic partners to distribute its study and deliver presentations to educate voters on how the new system would work, as well as the pros and cons of adopting it. After five years of sustained effort, in 2016, the reform passed.

LWV of Maine’s model and mission were critical to the reform’s successful passage. Many good-government advocates are effective in mounting legal challenges and legislative campaigns, and grassroots organizers have mobilized popular support for pro-democracy reforms. But LWV is distinctive in housing both approaches within the same organization. This model was once prevalent among civil society organizations; the historical shift away from federated membership organizations to professional advocacy has been identified by scholars as a driver of the growing sense of disconnect between citizens and government.

Funders can support the League of Women Voters by becoming a member or by making a donation to the national organization or any of the over 700 state and local chapters. Membership dues vary, but for LWV of Maine, individual members pay $55 per year. LWV relies on philanthropy to cover about two-thirds of its annual revenue, while membership dues and a variety of earned revenue sources cover the remaining one-third.

LWV of Maine has identified a number of ways philanthropists can help: $5,000 to expand translation of its voting rights materials to Spanish and French, in addition to the Somali and Arabic translations it already produces; $10,000 to create, host, and promote digital voter registration training; $25,000 to improve distribution of voter guides in hard-to-reach rural and immigrant communities; and $50,000 to cover the costs of a full-time organizer who could establish 20 new community partnerships and two new chapters.