COVID-19 caused more than 150 million people around the world to fall below the poverty line.[1] Research has shown that cash transfers that can be spent on urgent needs — whether one-time grants or guaranteed income — are a powerful way to improve lives. GiveDirectly helps by sending no-strings-attached money to people who urgently need it. 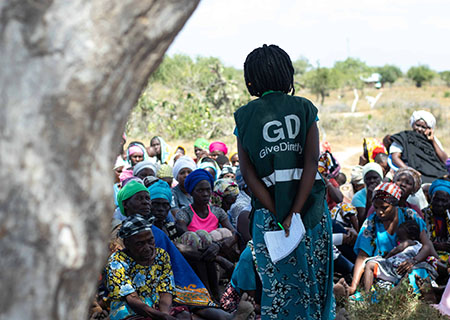 GiveDirectly transfers cash to people living in extreme poverty so they can meet their most urgent needs. Founded in 2009 as a private giving circle and opened to the public in 2011, GiveDirectly believes that people in poverty deserve to make their own choices about how to improve their lives, so the transfers have no conditions attached to them. They currently have operations in eight countries. GiveDirectly maintains strong partnerships with leaders at multiple levels of government and community, from district heads to village chiefs.

In response to the pandemic, GiveDirectly launched COVID-19 responses in Kenya, Malawi, Uganda, Rwanda, Liberia, DRC, and Togo. They adapted their model — which had previously included four in-person touchpoints — to be entirely remote and began giving in the U.S. as well, reaching 400k+ recipients affected by COVID-19.

GiveDirectly’s nutrition benchmark study compared the impact-per-dollar of unconditional cash transfers to Gikuriro, an integrated nutrition program in Rwanda. The study found that neither the nutrition program nor cost-equivalent cash transfers of $110 affected the study’s primary outcomes, but a larger transfer of $532 improved consumption, dietary diversity, and childhood growth 12 months after the baseline survey [2].

Cash transfers also have been shown to have positive effects on the neighbors of recipients. In a study published in 2019, GiveDirectly provided one-time cash transfers of about $1,000 to over 10,500 poor households across 653 randomized villages in rural Kenya. Over the 27 months studied, each $1,000 transfer increased spending by both recipients and nonrecipients by approximately $2,600[3].

The extreme poverty line is $1.90 a day, meaning receiving this amount (or less) would lift someone above the line. 88% of GiveDirectly’s funds are sent directly to recipients, and the rest cover banking and mobile money fees, operations expenses, software, insurance, and auditing. With additional funds, GiveDirectly can reach more recipients. $100 can cover six children’s education costs for a year. $1,000 covers one household’s annual food cost, agricultural supplies, and home renovations. Learn more at https://donate.givedirectly.org/.

[2] McIntosh, C. and Zeitlin, A. 2018. Benchmarking a WASH and Nutrition Program to Cash in Rwanda.” Innovations for Poverty Action.
https://www.poverty-action.org/study/benchmarking-wash-and-nutrition-program-cash-rwanda