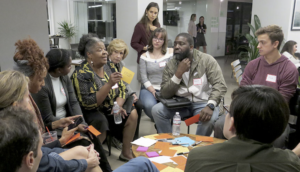 Too often, negativity surrounding news coverage leaves citizens ill-equipped to solve problems in their communities. A growing movement of journalists is working to change that. Resolve Philadelphia is an organization that develops and advances journalism built on equity, collaboration, and the elevation of community voices and solutions. Its flagship initiative, the Resolve Reporting Collaborative, is a partnership with more than 20 newsrooms reporting on communities that are working to solve pressing local issues. By shedding light on community efforts to create positive social change, Resolve’s work empowers citizens to take action and encourages responsive policy.

Resolve launched originally as a project of the Solutions Journalism Network, which trains journalists to rigorously report on responses to social problems. As criminal justice reform advocates were mobilizing ahead of Philadelphia’s 2016 District Attorney election, Resolve debuted The Reentry Project, a series of articles focusing on the experiences of citizens returning from prison. In 2018 Resolve became an independent organization and turned its attention to economic mobility, introducing Broke in Philly to report on resources available to the one-half of Philadelphians who can’t make ends meet and tracking the city’s push towards economic security for all. Now in its second year, the Broke in Philly collaborative includes 23 local newsrooms and one academic institution. The project has its own dedicated website where it curates content, and stories are cross-published on partnering organizations’ websites.

While its newsroom partners do the reporting, Resolve’s editorial team coordinates events and shares documents and ideas that help generate stories. Events have included info sessions with employers on the benefits and challenges of hiring formerly incarcerated employees and a hackathon to develop tech resources for people experiencing poverty. To strengthen the editorial process, Resolve provides a shared reporters guide, a story ideas channel on Slack (a cloud-based collaboration hub), and lists of contacts and upcoming articles. The editorial team also conducts focus groups, sends a weekly newsletter, maintains a social media presence, and looks closely at story feedback.

Broke in Philly has published more than 325 stories and videos on economic mobility. Reporters in partner newsrooms attest that the capacity and diversity of perspectives Resolve provides leads to articles that outlets could not report in isolation. The collaboration—which includes The Philadelphia Inquirer, local NBC and Telemundo affiliates, public radio, ethnic media, single subject news sites, and digital startups—ensures that stories reach a large and diverse audience. The Reentry Project, which coordinated a similarly broad and diverse partnership, won the Associated Press Media Editors’ Community Engagement award.

Resolve reporting has enabled responsive policy. After The Reentry Project reported on challenges faced by deaf detainees, the Philadelphia Department of Prisons hired sign language interpreters. Following a Broke in Philly story showing that nearly $3 million in bail fees for resolved cases were retained by the city of Philadelphia in 2018, Pennsylvania’s First Judicial District revoked the policy. The city now retains no bail for resolved cases.

Funders can support Resolve directly or by supporting the newsrooms that make up the reporting collaborative. The main costs of the year-long The Reentry Project were a $70,000 salary for the project editor and a $65,000 fund administered by the collaborative to support reporting, events, and additional project support. Funders can also donate to the Solutions Journalism Network which supports journalists practicing solutions journalism.